However, the largest residential fire hazard is with us throughout the year and you probably pass by it daily.  It is your clothes dryer.  FEMA reports that over the three years 2008-2010, almost 83% of residential structure fires started in the laundry room.   In those cases, 92% of the fires originated in the dryer. 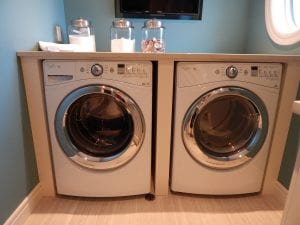 Here are some interesting facts:

Ignition of clothing can be due to placing improper items in the dryer (don’t dry your flip-flops) or spontaneous ignition of the clothing.  Clothing can spontaneously ignite inside or outside the dryer after the clothes have been dried and removed.  Note we see many fires in commercial laundries that occur in clothing that has been dried and piled or stacked together.  Research into these spontaneous ignition fires finds that most often a contaminant, such as vegetable oil or a petroleum product, had soaked into the clothing/towels/rags.

These contaminants can exhibit self heating, especially where they are heated in dryers in placed in piles where the heat generated by the decomposition of the materials cannot be dissipated.  Linseed oil is often described as the cause of self-heating fires, but cooking oils (such as sunflower, olive, or canola),  massage oils, and petroleum products can also exhibit self-heating behavior.   These contaminants are not well removed by standard washing machines.  Testing by Fire Findings found that after three hot water washes, vegetable oil remains in typical towels.